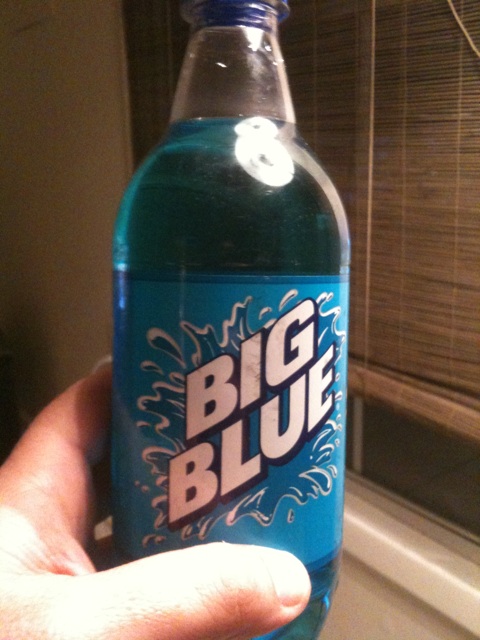 Why do I call it Zombie Kroger, you ask (I know you asked, so don’t pull that “I didn’t ask” bullshit. We both know that you did!)? I call it that because the clientele appears to mostly be older than the average corpse and moves even slower.

I don’t like to shop there, but I stop by since it is close on occasion. Here are the five reasons I should NOT routinely stop by Zombie Kroger – and why you should avoid it altogether.

What the hell kind of food is that and why is it there?

See that bottle of weird blue liquid? When I reached in to grab a couple bottles of Deja Blue water, apparently, I got one bottle of that blue shit too. First, what the hell is that? Is it like the blood of an Oompa Loompa? Did someone bottle unicorn pee?

Second, why in the name of sweet blue unicorn pee do you put that on the same shelf in the refrigerated case with water that has a blue bottle? If I wanted the nectar of some made up fruit from Narnia, I’d call Aslan and tell him to ship me a crate.

And, while I’m at it, why would you put all the cat food EXCEPT THE IAMS at one end of the aisle with the two sections of cat food separated by hundreds of bags of dog food? What genius thought that good food for cats should sit on two shelves 15 feet from the Kibbles and Shit?

Check it out…or not.

During the day, you would be lucky to find more than two lanes open at any given time. Normally, that wouldn’t be an issue, but when you have a store full of octogenarians who often buy food together and pay by check, you end up with issues. I was in line last week behind two women who had one cart of stuff divided into five separate batches of food that all had to be checked out separately and paid for with different payment types. Fortunately for them, every batch was fewer than 15 items so, naturally, they were in the express lane.

While I’m on the topic of express lanes and strange customers, when I was there tonight, a manager opened an extra express lane, but blocked it off with a sign and shut off the numbered lamp as the store got less busy so he could go back to whatever it is managers do. No one seemed to care. Several people – one woman pushing 90 wearing a full girl scout uniform (scout’s fucking honor!) – just walked around the sign and got in line.

Finally, since there are at least a few normals that shop here, how about a self checkout stand. I realize this could be an unmitigated disaster since many of the folks in the store probably don’t even know how to use a remote control for a television, but maybe try an experiment for those of us who do.

How about you widen the aisles or something?

I feel for the older folks who come in there on a regular basis and the many disabled as well. The aisles are so narrow, they barely fit one person at a time let alone a person, his zip scooter, an oxygen tank and the oversized nurse helping him shop.

It also doesn’t help that the store is often populated with some really odd characters who seem to stand and stare for what seems like hours at toothpaste or milk or tampons. One guy tonight was in an aisle when I walked into the store and still in the same spot when I left. I assume he was comparing the price of canned peaches to determine if Dole had enough nutritional value to justify losing the ten cents off coupon he had for Libby’s, but what the hell do I know?

Speaking of small, what made them think that a customer service desk the size of a toll booth was big enough for the dozens who want to cash their social security checks twice a month? And I really hope you don’t want a birthday cake (you don’t!) from the bakery since the counter space is smaller than the jewelry display case my ex-wife and I used to haul to shows all over Texas (yeah, I sold jewelry…you wanna make something of it?).

I’m just saying that if your meat department offers only two cuts of beef and one of them is “ground,” that isn’t exactly what I’d call a wide selection. Just something to consider.

Which way do I park?

Finally, what kind of crazy bastard designed this parking lot? Angled parking is fine. It’s not the smartest way to go for traffic, but with all the giant ass cars people drive around, it’s probably a necessity.

However, don’t have the parking angled BOTH WAYS IN THE SAME LANE!!! I don’t have to do a million dollar traffic flow study to tell you that a lane that is really only big enough for one-and-a-half cars and has angled parking going in both directions is going to be a freaking disaster.

Now, add that parking to a lot where a LOT of very old and disabled people park. It’s like putting all compact car spaces at Whole Foods for all the Hummers – oh, right, they do that too.

Ingress and egress needs to be ultra easy when you have a bunch of people with cataracts driving giant Oldsmobuicks. It’s science.

I’m not a grocery store expert even though my four years of work at Kroger in high school does qualify me for upper management at Food City, but I can tell you that Zombie Kroger is terrifying, even more so than Ghetto Kroger and that is saying something.

← New Additions to the Balke Household
Oh, Sure, if You Want to Use “Statistics” →