Devastation from Hurricane Katrina Beyond Belief

by Jeff on August 31, 2005 in Uncategorized, Weather Archive • 0 Comments
Share This

Some of you know that I have an odd fascination with hurricanes. I’ve watched them my whole life growing up on the Gulf Coast and going through Alicia in the 80’s and numerous tropical storms and depressions including Allison in 2001.

I like to track them and I find them terribly fascinating. Unfortunately, Katrina was as deadly as she was interesting. 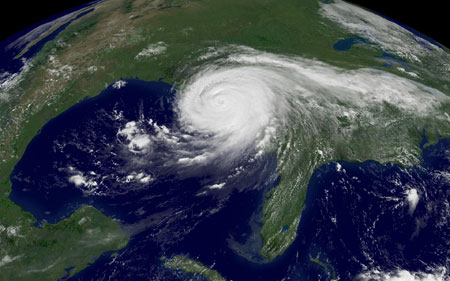 I mean, just look at that! That is a classic, textbook hurricane. That is the kind of thing they build models of to study. When Katrina was sitting a few hundred miles off the coast as a category 5 hurricane with winds maxing out at 175mph and a central pressure of 902mb, I was in awe.

This was the mutha of all storms. Only 3 other storms ever bottomed out pressure wise lower. Only three cat. 5 storms have ever made landfall in the US. In addition, this was a BIG storm with a 90-mile-wide eye and hurricane-force winds extending outward 150 miles. That’s wild.

New Orleans has been in a predicament for years given the “fish bowl” in which it sits. It was a statistical certainty that they would be hit with a big storm at some point and a distinct possibility that what has happened could happen.

The irony is that they missed the worst of the storm. Much like the hurricane that hit near there last summer, Katrina jogged to the east at the last minute sparing NOLA the 30-foot storm surge absorbed by Mississippi coast.

But, it didn’t matter. The levees holding back Lake Ponchatrain collapsed anyway and now we are looking at one of the largest scale natural disasters in US history.

The Galveston hurricane of 1900 killed the most people ever with 10’s of thousands dead. Tropical Storm Allison sent repair costs into the billions in Houston in 2001. But, Katrina will no doubt be seen as the worst by modern standards innundating three states with massive damage and possibly destroying the majority of one of America’s oldest and most historic cities.

It is something that is difficult to comprehend and I feel horrible for the people who have had to flee the destruction.

For more information on how you can help, go to the Red Cross website and give of your time and money.

Most of all, keep the folks effected by this storm in your thoughts.