Dear Abby: Getting Behind Guys and Their Thongs 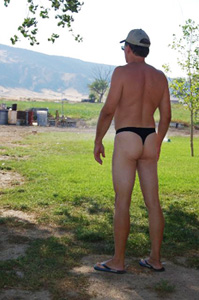 For those who don’t know me or haven’t read my blog until recently, you probably don’t know of my love of Dear Abby. She is brilliant for so many reasons, but mainly because she deals with some of the most insane questions with dignity and just a hint of smart assery.

Today (speaking of assery), she revealed the results to the “survey” she did regarding thongs (chicks dig them – hooray!), but, more importantly cracked the case (get it!) on thongs and the men who love them.

First, there’s Dino (is it DEE-noh or DIE-noh like the thongasaurus rex?) from San Francisco who calls Abby “girl” and wears thongs under his “tight white jeans.” I think he likes the International Male catalog for the thongs AND the pretty pictures.

Then there’s STRUNG UP THE MIDDLE in Vegas (naturally) who likes to wear them under clothing and as “swimwear by my pool in the summer” which he says to close his letter “makes him…” and leaves us hanging just like the front of his banana hammock. My first thoughts were: Embarrassing, terrifying and/or that guy that makes people scream “DEAR GOD, MY EYES!!!”

Then we have CONFUSED from Virginia (I bet he’s confused if he’s in a thong in Virginia) who decided to try an experiment and see what all the fuss was about and now finds women’s undergarments sexy…TO WEAR.

This is like the guy I knew whose girlfriend left him for another woman after he insisted they have a three-way with her. THE MORAL: If you don’t want the answer, don’t ask the question.

Iâ€™m voting thongs down. Iâ€™m 62 and grew up in the â€™50s and â€™60s with three good-looking sisters who always wore pretty ladiesâ€™ nylon briefs.

In the â€™70s and â€™80s girls adopted those ugly bikini panties, and now theyâ€™re wearing thongs? Abby, please urge them to adopt those pretty panties of the â€™50s and â€™60s again.

Since Abby didn’t respond directly to most of these letters, I’d like to take a crack (get it!) at this one.

It is certainly understandable that an older gentlemen such as yourself would be put off by modern women’s undergarments. It is also easy to understand that you like a certain style since they were considered attractive at the time you were growing up.

But, your first paragraph makes me wonder something, Jack. How can I put this? Hmmm…did you ever see Flowers in the Attic? If not, rent it because it’s like so awesome and stuff.

There’s this scene where a young, naked Kristy Swanson (she got naked when she was older to, for reference) is in the bathtub and she and her brother are locked in an attic, slowly being poisoned by their grandmother. Because they don’t know any better, they learn about love the old fashioned way – with each other – kinda like the royals in England. It’s just like Blue Lagoon, but without the menstrual scene…or the ocean…but with the incest.

Anyway, I’m not concerned that you noticed your sisters were attractive but rather interested in this story you started telling about three hot sisters in panties. I’m also worried about your health, Jack. Did you start writing a letter to the Penthouse Forum and then decided half way to write to Abby instead? I think you might be senile…or inbred…or perverted…or all three. I suggest you seek medical advice.

Stop looking at me like that. You know you thought the same thing, perv.

2 Replies to “Dear Abby: Getting Behind Guys and Their Thongs”