You know something?Â  Weingarten Realty is really starting to piss me off.Â  Houston is already known around the country as a sprawling hellhole full of nothing but run-down strip malls and all-too-common strip clubs.Â  Weingarten and its ilk prosper from the growth of strip malls and help to slowly destroy any sense of uniqueness the city may posses.

First, it was the River Oaks Theater and the old Alabama Theater location.Â  I blogged about it here, here, here and here and there’s even a petition about it here.Â  Now, they are taking down one of my favorite Houston restaurants, Tien Ren.

Tien Ren is a small, family-owned Chinese restaurant on the corner of Westheimer and Voss.Â  It has been there for 18 years, originally named Wonderful Vegetarian for its completely vegan meals and buffet.Â  EVERY PERSON I’ve ever taken there – vegetarian or otherwise – has raved about the food.Â  To be honest, vegetarian or not, it is my favorite Chinese food anywhere.

When I got to Tien Ren today with K, we saw this sign on the outside: 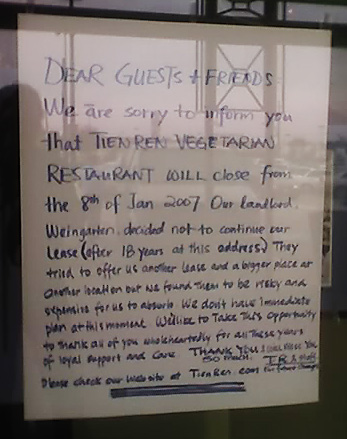 The gist of the sign is that they are closing their doors because Weingarten, who owns the strip center they are in, isn’t renewing their lease because they want to give it to a chain store that sells bicycles.

18 freaking years and they go under because of this???

I spoke with the long-time manager and he told me that they were offered another space in the center but that it was a third larger.Â  They do turn a profit, but they aren’t a huge place.Â  It’s a family cafe.Â  The extra space didn’t mean more rent, but it did mean double the insurance, a higher maintenance fee to the property management company and increased utility bills, nevermind the cost of moving and re-installing equipment they’ve had in the same place for nearly two decades.

This is a place routinely voted best vegetarian food in Houston by the Houston Press, the Houston Chronicle, etc.Â  I can tell you this is devastating news to me.Â  I’ve been going there since 1992.Â  It was the first real Chinese food I had ever eaten.Â  There was a period of years where I ate there at least once a week, often twice or more, despite living 20 minutes away.Â  I’ve probably never gone more than six weeks without stopping in to get some food or take out.

Their manager told me that the Weingarten person told them to face it that they were small and the other company was big, that a family just can’t compete with a corporation.Â  There are so many things wrong with this statement, I honestly don’t even want to start into it and it pisses me off just thinking about it.

They say they will try to find an alternate location, but there are no guarantees.Â  I’ll be going back tomorrow and probably getting a few orders to go to put in the freezer and ration over the next few weeks.Â  Another family-owned, Houston institution bites the dust to a chain store.Â  Funny because the bike shop will be only one of half a dozen opening in Houston and just happens to be right across the street from an Academy and just a couple blocks from a Sun and Ski Sports, both big bike sellers.

Good luck with all that.Â  And, thanks again, Weingarten, you shitty waste of economic space. 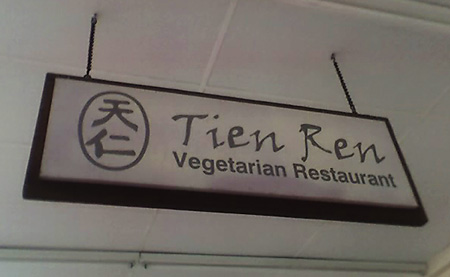 ← Today Was Just a Strange Day
Stuffs for Sellin’ →