There are few things more annoying than advertisements on websites, none moreso than ads that inhibit your ability to view content. The Houston Chronicle website is fantastic and forward-thinking in many ways, but advertising is not one of them. 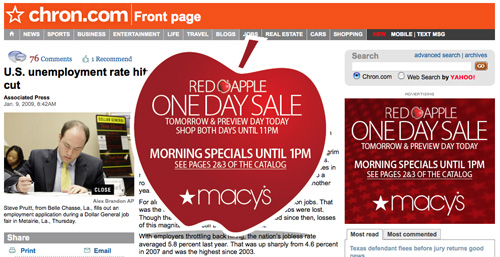 While I’m sure Macy’s wants to get everyone’s attention now that they’ve announced they are closing a bunch of their stores, there is NO reason to force me to look at a stupid flash animation of their ad that covers the story I’m trying to read, ESPECIALLY when the ad is not accompanied by a “CLOSE” button.

Frankly, button or no, having an ad drop into the content area is just never acceptable and it makes me LESS likely to patronize any advertiser that allows their ads to be placed on a site in this manner. 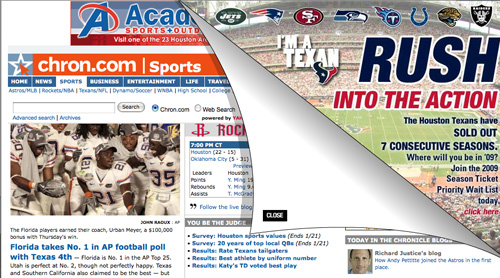 This is even MORE annoying if that’s possible. It’s bad enough that we have to look at a peeled back website page that – AGAIN – covers content, but this moves ridiculously slow and doesn’t show you the CLOSE button until the whole thing has loaded. That is unacceptable and, again, makes me want to not buy whatever the hell that advertiser is selling.

I get that newspapers are trying to monetize everything. They have to as print fails. But, this is the WRONG way to do it. If they didn’t have a cookie that blocked these ads for 24 hours after you’ve seen them once, I would visit far less frequently. As it is, I get most of their news through RSS feeds anyway.