Be True To Your School? When Kids and Beliefs Collide 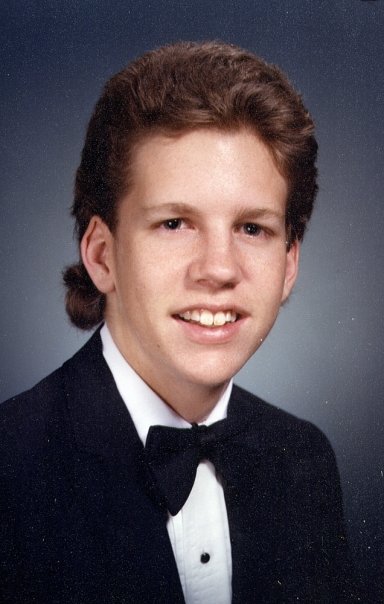 Senior year, that hair's getting' a little long there, mister.

When I was very young, my grandfather, an ardent Christian conservative, put a lot of pressure on my parents to enroll me in a parochial school, an ironic choice given my parents were both public school educators. But, they chose to go along with the request, at least in part because the public schools near me probably weren’t the equivalent of Our Savior, where I went from kindergarten through eighth grade.

This was the 1970s and Christianity was, even in the south, somewhat different than what it became after the Moral Majority movement of the early 1980s. In many ways, it was hippy Christianity. We sung folk songs in class. We talked about water conservation and God in nature. I suspected sometime later that more than a few of the teachers and parents smoked weed.

It was still church-based. It was still in Texas. That meant the occasional fire and brimstone sermon, corporal punishment for a variety of infractions and a fairly closely guarded morality. But, it wasn’t the harsh, polarizing, political, often angry version of Christianity popularized on talk shows and in speeches today. My teachers were silk shirts and Birkenstocks, not three-piece suits and wing tips…at least not until high school, which was, to say the least, confusing for a 13-year-old who had no dog in politics and whose parents were decidedly liberal compared to most of the parents of kids my age.

This week, I read about a kid who left Lutheran High North in Houston, the high school I attended from 1983-87. According to a video he posted on YouTube, he was given an ultimatum by the school to to stop being gay or face expulsion. I didn’t find the story all that surprising.

Before I graduated in 1987, the school, already evangelically inclined, was deepening in conservative theology. Teachers who were on the fringe of those belief systems were leaving — rumors say they were being dismissed — and students were being forced into a more regimented approach to school. Long hair on boys and short skirts on girls were all but eliminated. Soon, school uniforms replaced jeans and collared shirts.

While I was there, the same institution that fostered my young Christian studies actually helped to begin my shift away from conservative, Christian beliefs, albeit inadvertently, via a viewing of Ghandi in history class (I simply couldn’t fathom that that man of peace was going to hell simply for being Hindu — nevermind the congregation of Hari Krishnas a block down the street my religion teacher referred to as “a cult”) and through long discussions about meditation and literature with various teachers who have all moved on to other schools and professions. After my time at LHN, the school began rapidly removing as many elements of secularism possible.

Of course, Lutheran High North was and is free to do whatever it wants. It is a Christian institution based on the beliefs of the church in this modern era. Lutheran is right there in the name, after all, and the Lutheran Church Missouri Synod is only slightly less conservative than the Southern Baptist church and not close to the folksy, quaintly liberal American Synod as caricatured in NPR’s long-running series A Prairie Home Companion. As a school and a religion, they are all welcome to discriminate whether I agree with those beliefs or not.

And this is not to say there aren’t good people working for parochial schools. There most certainly are. The education kids receive there is often superior to what they find in overcrowded and under-funded public schools, despite the reliance on sometimes dogmatic theology.

Still, that specter of evangelical conservatism is something that must be dealt with if that isn’t your cup of tea. It makes me wonder if kids are still having sex, drinking and doing drugs to the degree they did in my high school years. There were clearly some gay and lesbian students when I was in school, long before “don’t ask don’t tell” was a thing, and, to my knowledge, no one pulled them out of class to tell them to get back in the closet. I have a suspicion that that is, for the most part, true today as well. The church can be notorious for conveniently ignoring people’s private lives so long as they don’t “put it in our faces” which, I suppose, could be argued this young man did when he posted about who he is online. Lutherans, Germans in particular, don’t care for outward displays of pretty much anything, so a boy kissing his boyfriend on YouTube likely qualifies in the minds of these religious folk as “in their faces.”

For my part, I got a good education from LHN and Our Savior before it. Let’s say I was mentally advanced but socially stunted. To go from a graduating class of just over 50 to my first psychology class at the University of Texas of 500-plus was jarring. To see kids openly doing things people at my school only did behind locked, closed doors in respectfully darkened rooms was eye-opening. And to experience a liberal college campus was as liberating as it was uncomfortable.

But, it became quickly and readily apparent that this was preferable for me. The year after I left school, they instituted a hair rule that would have forced me to cut my rapidly growing locks — this was the ’80s. Naturally, many of the kids with long hair simply shaved their heads, much to the consternation of those in charge. Kids will be kids after all. Within a few years, my hair was reaching my waist and people who knew me as the good, conservative, Christian boy suddenly looked at me differently, and I couldn’t blame them although I probably did at the time. I WAS different and that was totally fine, even if it felt like a betrayal to the 20-something version of myself.

I wouldn’t necessarily trade those years in parochial school. They, as much as any other part of my life, made me who I am today and I’m ok with that guy. But, I respect the struggles others like this young man must endure. Being different is not easy, especially when everyone around you can seem, at times, almost clone-like in their similarity, like one giant, religious clique to which you are, ever so politely, uninvited.

My only advice to him would be to be glad you can move on. Being who you are is always better than bowing to the pressures of those who don’t want you. People are going to think differently than you no matter how accepting the world becomes of you or anyone else. There will always be something to argue about, always a group that sets itself apart from the rest of the world because it believes something others don’t.

Be glad you figured it out when you were still a teen. Some people go their whole lives and never do.

2 Replies to “Be True To Your School? When Kids and Beliefs Collide”