A Very Tough Month for Pets

by Jeff on November 16, 2004 in Cute Fuzzy Things Archive, Uncategorized • 0 Comments
Share This

If you’ve read my entries, you know that we lost one of our cats (Tessa) on October 20 to an illness that had plagued her for years. Early this morning, we suffered another loss, except much more sudden.

At just after midnight, I headed upstairs to watch some tv and relax. We have one cat, Arthur, who stays upstairs in a loft area that was convered from an attic because he is declawed. This is my room to goof off, watch tv and sleep when my snoring is a problem for my wife.

I noticed immediately that Arthur didn’t come when I put out some food and I knew something was wrong. I searched and found him under the bed barely able to breathe. Rebecca and I rushed him to the emergency animal clinic where they gave him oxygen and attempted to stabalize his condition. At 4:20am, I got the phone call no pet owner wants to get. Arthur had passed away the apparent victim of a serious heart attack.

Ironically, today was the day I was going over to pick up Tessa’s ashes. Like ourr other pets that have passed away, we had her creamated.

Arthur was special to me for many reasons. I adopted him after seeing him at Petco as part of a Humane Society display. I spent the better part of the afternoon driving all over town to arrange his adoption. That was six years ago.

He has always stayed with me either in my studio (originally) or in the loft upstairs where I spend a lot of time. Instead of sleeping on the bed, he preferred to sleep on top of me often in between charging across the expanse of the upstairs for no reason.

He has served as comfort to some of our other cats when they needed time away from the pack of downstairs animals, rarely having problems with another animal. He only remained upstairs because he was a gentle soul and would be chased by one of the more agressive cats downstairs.

Both my wife and I loved him dearly and we’ll miss him a great deal. The suddenness of it all was both horrible and comforting. We knew he didn’t suffer long and it was over quickly, but it was so incredibly unexpected, we were left shocked and really upset.

I’m glad that Arthur was a part of our lives and he will always have a special place in our hearts. 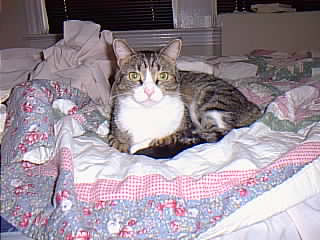