Giving Thanks: The Ten Bass Players Who Most Influenced My Playing 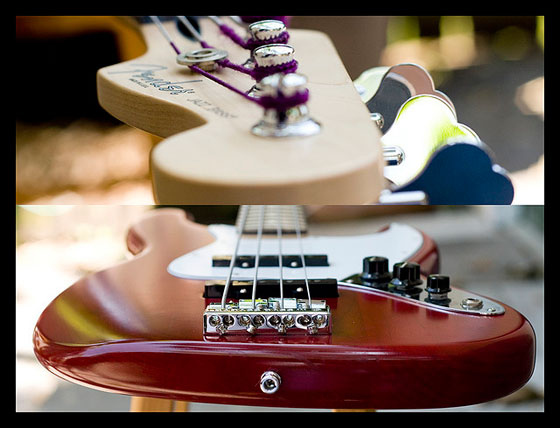 This week, I bought a new little practice amp from my good friend, Jim, out at Texas Music Emporium. In truth, I have not put a lot of time into practicing the bass guitar in quite a few years. When I was much younger, I spend countless hours hunched over my bass playing until my fingers were raw and my arms tired.

At this point in my life, that doesn’t really interest me as much, but I have felt the need to put in some practice time, if for no other reason than to see how I’m doing compared to lo those many years ago when I actually spent time with a metronome and learned songs note for note.

To my pleasant surprise, things that seemed terribly difficult to me back then are not nearly as tough today. I thought my skills had eroded thanks to years of neglect, but the lesson I learned is that the practical application of all those hours of work has not only allowed me to maintain what little skill I do have, but actually improve from where I used to be. In short, I may not be the next Jaco (he was kind of a big deal), but I’m also not completely devoid of ability.

Since I’ve spent the better part of 30 years working on this instrument, I figured it was a good time to pay tribute to the guys who literally informed every note I play — another thing I learned while jamming along to music this week. These are the ten bass players who have most influenced my playing.

I put them in no particular order because, well, they are all so good, it would be ridiculous.

When I was 15, I went to my first concert. It was Yngwie Malmsteen at a bar in Houston. The opener was Talas featuring the monster, shredder bass player, Billy Sheehan. While I certainly dabbled (poorly, I might add) in speed demon theatrics and ridiculous finger tapping as a young player, the thing that impressed me about Sheehan was the same thing that impressed me about many bassists: His strength.

Whether it’s Sheehan or Stanley Clarke or Ron Carter or John Entwistle, the best bass players are always guys who play(ed) with strength and aggression. I love how Sheehan would pull strings out of position and make the instrument growl like a guitar. A lot of how I simply approach the playing of rock music came from watching Sheehan grind strings and throw the bass around like a rag doll. I got to the point where I would put my pinky on top of my third finger just to push it down harder and that was all Sheehan.

The first time I saw the above video, my jaw hit the floor. I was probably about 15 and I had never heard anything like this before. Later, I heard the work Palladino did with Pete Townsend and I realized I had to have a fretless bass. There was such a fluidity to the instrument that just didn’t happen with frets.

Also, there was a tremendous funkiness to his playing, something that was common to many of the guys on this list. Like most of the great session guys, he knew how to add something really cool at just the right moment without stepping out of line — check some of his work for Tears for Fears as an example. I also first heard the practical use of an octave pedal from Palladino’s bass.

Even after he dropped his nearly singular focus on fretless to play r&b with guys like D’Angelo and the John Mayer Trio, you could always tell when it was that lanky Brit (ok, Welsh) guy on bass.

In my teens, I became friends with a guy that worked at Sound Warehouse, the chain of music stores eventually bought by Blockbuster. He would turn me onto really cool music. One day, after reading the latest Bass Player Magazine, I came in looking for Live and in Living Colour by Tower of Power having no idea what it was, just knowing the magazine said it was one of the best bass albums of all time. My friend was impressed.

I had never heard anyone with such precise command and freight train-like speed from his right hand. It was insane. To this day, I can barely make it through “What is Hip?” without my hand going into full on cramps, nevermind trying to cover all 23 minutes of “Knock Yourself Out,” which was the entire B-side of that live album.

Rarely are guys this funky and this busy at the same time. It blew me away and still does.

When Sting assembled his first solo backing band (his best, in my opinion), I had never heard of Darryl Jones. Hell, I’d never heard of Branford Marsalis, Kenny Kirkland or Omar Hakim either. The making-of film Bring On the Night was a complete life changer for me, not because I loved Sting all that much, but because, at age 16 or 17, it opened me up to a world that I had never known before.

I was a little metal kid and this live film and album demonstrated to me that electric guitar could be inconsequential and the music could still kick ass. Once I heard Jones on this, I went out and dug up everything he did including his work with Miles Davis and John Scofield. I loved the smoothness of his playing and how sneaky he was at getting really complicated stuff into fairly simple songs.

The song above was and is my favorite Jones-Hakim groove.

As a young kid, I was mostly influenced by the listening habits of my parents. Fortunately, my mom mostly played the oldies station in the car which consisted mainly of the Beatles, British invasion pop, Motown and Atlantic r&b, which is where I got my first inkling of funk music and the brilliance of Dunn. Once I saw The Blues Brothers, it was over.

I tended to prefer the earthier sounds of Atlantic with Aretha Franklin, Wilson Pickett, the Bar-kays, Ray Charles, Sam & Dave, Otis Redding and others to the more sparkling pop of Motown and Dunn played on virtually all of it. His tone was fatter than that of his Detroit-based contemporaries as he owed as much of his playing to country music as the Motown guys did to jazz.

It set him apart and made him not only a melodic player, but a guy that could lay down a foundation groove as powerful and rock solid as you could imagine. The video above has perhaps my favorite song with Dunn and easily my favorite from Charles.

I am a self-confessed Beatles nerd. I love virtually everything about them. For many years, I was so focused on the songs, I essentially ignored McCartney’s beautiful and brilliant bass lines. I knew they were interesting, but my bass playing and my songwriting didn’t always cross paths, so I focused on the songs.

Later, I realized that some of this playing was seeping its way into mine, particularly the big, beefy, upper-register stuff that he is so known for. “Something,” to me, was nothing short of spectacular. Not only was it one of the most beautiful love songs ever written, but McCartney’s fascinating counter melody on bass brings it to life.

In the last verse, when he plays that bouncy melody in the giant gap between lyrics, I still try to stop people from talking and force them to listen to it. It’s pure bass player ecstasy.

There is very little that can be said about Jaco (note he and Geddy are the only bassists I refer to by first name partly due to the uniqueness of the names and partly out of respect) that would accurately describe his impact on the world of bass. He was nothing short of a genius on the instrument. If there were a bass guitar Mount Rushmore, his head would be one of the four.

His tragically short life (I remember reading about his death buried deep inside the Austin American Statesman) was as chaotic as his music was serene. “Portrait of Tracy” is a song that first introduced me not just to the possibilities of fretless bass, but a way to approach the bass that removed it slightly from its beefy undertones, making it light, airy and almost etherial.

One of the true “artists” of the bass guitar and the definition of a legend.

Whenever I would trace back the roots of players I really liked, all roads would invariably lead to Jamerson. It’s hard to imagine just how great an impact his playing has had on countless bassists throughout the years.

For me, the insane grooves mixed with all the accents and silky melodies he added underneath the dense musical arrangements of Motown’s dozens of hits are as instructional as they are remarkable. To hear that kind of swagger and funk buried inside the pristine melodies of Holland-Dozier-Holland is, in and of itself, miraculous. To be able to play them with such deft skill and subtlety is almost unimaginable.

Every time I listen to a Jamerson part — like the wonderful line in the above video he played while drunk and lying flat on his back (Jesus!) — I recognize all the little elements I try to incorporate into my own playing, realizing full well that I’m not 1/100th the player he was.

Geddy was my first true bass hero. How could he not be? He was playing incredibly difficult parts in a loud, albeit nerdy, rock band. The signature grind of his Rickenbacker bass became a staple of garage musicians hoping to be like Geddy and mostly failing miserably.

What constantly impresses me about him is the way he has grown over the years and improved as a player. His sound has matured. His playing has grown more deeply rooted in grooves — though he was and is clearly the most funky of the trio and not just funky by Rush’s standards, which are decidedly un-funky — and driven a band that is better today, musically, than ever.

There are few things about my playing that aren’t informed by Geddy. He’s quite possibly the greatest single influence on my playing and, like Sheehan, it was the WAY he played, not the complexity that drew me in, though I’d still love to be able to play the solo breaks in “La Villa Strangiato.”

No one combined the groove of r&b music with the power of rock like Jones. He was, at least for me, the one guy that could do it all. It didn’t hurt that he was paired with perhaps the greatest groove drummer in the history of rock and roll or that his session musician background provided him with both technical and practical skills.

More than anything else, Jones was the ultimate bass guy. In a band dominated by a guitar virtuoso, a drum god and one of the seminal rock singers of all time, Jones played the straight man and held it together. He was my greatest example of how to be the glue that keeps a band held together.

But Jones had chops. “Ramble On,” “Bring It On Home” and, my favorite, “Song Remains the Same” (see above) demonstrate a guy deeply rooted in blues and r&b with the aggressiveness and intensity of a rocker. If I could be one bass player, Jones would be it.

← Houston Press Cover Story on 1560 The Game
Thanks to Chris Gray, the Houston Press, My Dad, Music and More →

3 Replies to “Giving Thanks: The Ten Bass Players Who Most Influenced My Playing”